During the Easter season, Christians have traditionally greeted each other with the words “Christ is risen!,” to which the faithful reply, “He is risen, indeed!” The tradition is seldom practiced in North America or Australia anymore, apart from the opening of the Easter Sunday service. Instead, English-speaking Christians prefer the more prosaic, “Happy Easter” on Sunday and “hello” the rest of the time. Christians have not, of course, stopped believing in the resurrection, but for whatever reason, we’ve lost the practice of proclaiming Jesus’ resurrection regularly, loudly, and exuberantly during Eastertide. 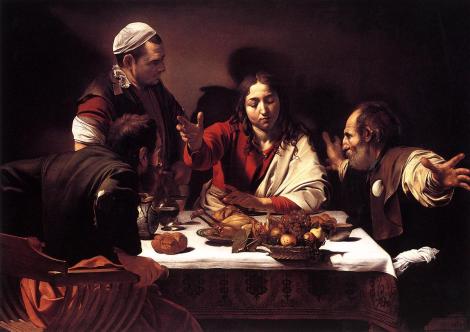 Despite its lack of use, the paschal greeting points to a rich intellectual and imaginative stance that holds faith, wonder, and even disbelief together with experience. When Jesus’ friends first announced to each other that their Lord had risen, it was not in the context of superstition, grief-propelled wishful-thinking, or mystical religion. Cleopas and his companion knew of Jesus but were not part of his inner circle. Nevertheless, they were disappointed by his death and, while traveling home from Jerusalem after the crucifixion, they discussed and “reasoned” about the Galileans’ crucifixion and empty tomb as they walked. But, clearly they did not believe the reports of the women that an angel told them Jesus was alive. If they had, they would not have been walking away from Jerusalem to their home in Emmaus.

In the midst of their dusty journey, a man walks up beside them, asking about their conversation and downcast expressions. After telling their fellow-traveller about Jesus, the three debate the law and prophets and the traveller explains how the entire tradition pointed, not only to the Messiah’s death but to his resurrection. Such intellectual engagement premised upon the actual death of Jesus is not fertile ground for imaginative visions. But, Cleopas and his companion clearly enjoy their fellow-traveller’s company and so, upon arriving home, they invite the man in for dinner. As their guest takes the bread and breaks it, they realized that their guest is Jesus.

My favorite part of the story, though, is what Cleopas and his companion report to the disciples. Of course, after realizing that they’ve been walking and talking with Jesus through the afternoon, they rush back to Jerusalem and tell the disciples “what had happened along the way, and how they had come to recognize him in the breaking of the bread.” Jesus appeared to Cleopas and his friend “along the way,” while in the middle of things, in the midst of the mundane, the ordinary. He was the unlooked for and, certainly, the unexpected guest. But, there he was—the ordinary dinner table becomes the place where the resurrected God-Man’s identity is revealed.

Despite walking, talking, debating, and eating with Jesus, Cleopas, his companion, and the disciples did not arrive at a simple, passive, and certain knowledge that Jesus was alive. No, Cleopas and the others were “in their joy” at the resurrection, and “disbelieving and still wondering.” They did not have all the answers or a complete understanding of what had happened or why. Cleopas and his traveling companion did not expect a miracle—they even doubted earlier reports of a miracle—and yet they found themselves returning to Jerusalem, greeting the disciples in joy, disbelief, and wonder, with the news “Christ is risen!”

A person does not need to fully understand the mystery, to believe with easy certainty in so improbable an event as the resurrection, to be a Christian. Faith is, more often than not, the collision of experience with disbelief, leading to wonder and joy. But, to be a Christian, one must be able to declare, wonder-filled, that “Christ is risen”! This makes the paschal greeting the most basic Christian creed, the most basic declaration of faith.