December 26th, what is Boxing Day in Commonwealth countries is known affectionately in America as the “Day After Christmas,” as in “The Day After Christmas Sales.” It is, traditionally, a time to begin shopping for all the things one didn’t receive on December 25th (at drastically-reduced prices, of course), eat cold turkey or ham sandwiches, and begin watching college football bowl games. The Day After Christmas encourages a continuing attitude of consumption carefully honed in the lead-up to Christmas by focusing individuals and families on eating, drinking, and buying for another full day. While some workers in more elite jobs may get the day off, for many, the day also marks a return to work, especially if one’s occupation is in the retail or hospitality industries.

While Boxing Day increasingly looks very much like the Day After Christmas, the public holiday is actually closely related to St. Stephen and concerned, not with consumption, but with caring for the poor. St. Stephen, recognized as the first Christian martyr was, before his death, one of the first Christian social workers. His job, as a deacon  in the early church, was to oversee the distribution of alms, clothing, and food to the widows, the orphans, and those in need, ensuring that everyone’s needs were met. Appropriately, the day his life is celebrated—December 26th—comes on the second day of the Christmas season: Stephen’s dedication to the poor is a both a reflection of God’s care for his creation as demonstrated in the person of Jesus and an example of a life dedicated to continuing God’s redemptive work through meeting the needs of others. The spirit of St. Stephen’s day was somewhat at work in the traditional observance of Boxing Day, in which the gentry would give gifts to their servants and those who worked on their estates and all those in positions of service were given the day off. Far more clearly, the spirit of St. Stephen is commemorated in the English Christmas carol “Good King Wenceslas,” which recounts the king 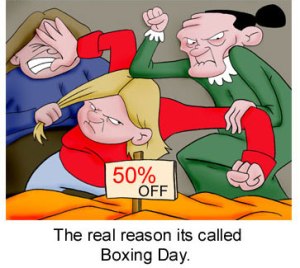 leaving his castle to prepare a feast for a poor man whom he sees gathering wood in the driving snow.  As the carol progresses, the King’s servant grows weary trudging through the storm and the king encourages him to take heart and to take shelter from the weather by walking behind him. Like St. Stephen himself, King Wenceslas’ goodness to the poor man and his page are allegories for God’s descent from heaven in the person of Jesus and his love for all of us who are poor, in need, suffering, and discouraged by life’s stormy blasts.

As the stories of King Wenceslas and St. Stephen remind us, Christians believe that the birth of Jesus is only the beginning of God’s work of redeeming creation. This is why December 25th is really the first day of Christmas: it is the beginning of a new phase of the story. While Jesus’ birth announces the coming of a kingdom of peace and justice, the coming of that kingdom is also a new proclamation of war against the brokenness, suffering and evil that so frequently characterize the world.  What is more, God’s work of redeeming creation that begins with Jesus continues through us, making our works of kindness and generosity, our works against injustice and in favor of peace all part of God’s battle to redeem  creation.

2 responses to “Christmas (and shopping) for others”