Religion is not neutral to politics, nor is politics neutral to religion. Despite those who try to keep them separate, the fact is that every political stance is informed by some form of religious worldview, and every spiritual belief, if carried to its full logic, will bubble into political action. Two religiously-infused political moments of the past week illustrate this.

On one side of the South Atlantic, the Brazilian presidential election arrived at an unexpected turn. The predictable 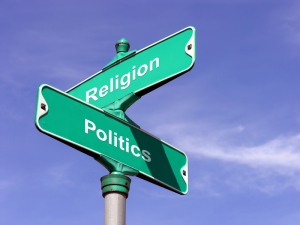 victory of Dilma Rousseff, the leading candidate, was postponed for a second round of votes, according to most analysts, because a mass segment of the electorate shifted their votes to another candidate, Green Party Marina Silva. Silva championed environmental concerns and was the only candidate not favouring the legalization of abortion in Brazil, and this last-minute, surprising twist launched a wide-spreading debate on the role of faith in politics. One columnist in Folha de S. Paulo, Brazil’s leading newspaper, seized the moment to argue against religious participation in politics.

“The danger of using a spiritual logic to address politics is that it introduces moral absolutes into questions that need to be resolved from an essentially practical perspective, usually with recourse to negotiation. To sum up, the last thing we need to do is to bring the notion of sin to laws and public policies. There is of course a secular equivalent to the concept of sin, which is crime. The difference is that, while the latter has an exclusively reasonable justification on more or less utilitarian grounds and admits gradations, the first, because it is dictated by a superior and supposedly incontestable authority, arrives in non-negotiable packages. In a certain way, to think religiously is to negate politics.” [1]

Well-meant yet a bit confused, Hélio Schwartsman fails to notice is that his statements contradict one another. To defend that moral absolutes or the notion of sin are not applicable to politics is, of course, a religious view. He is also thinking religiously; he is also negating politics by excluding people who believe that moral absolutes are of relevance. He is advocating a dichotomy between morality and practical matters, as if they could be divorced, and trying to promote political debate by silencing one voice in it.

In stark contrast, the world celebrated the retirement of Archbishop Desmond Tutu last Thursday, a

religiously motivated opponent of Apartheid across the South Atlantic. A Time magazine article exalted the achievements of the Nobel peace laureate who became “the world’s moral compass” and “our global guardian” because of his stance against injustice. “Tutu’s secret, then, is no secret at all. It is faith,” concludes the article, and U2 singer Bono complements saying that Tutu “ties tight faith, justice and compassionate earthiness. He takes on the most sophisticated structural wrongs and breaks them down with pure focus.”[2]

Be it in Brazilian elections or South African racial struggles, or in any other context, our beliefs do inform our political views. There can be negative influences, as well as questionable compromises between faith and power, of course, but only fully developed moral absolutes like those of Desmond Tutu have the solidness to stand unflinchingly against injustice. “God is not evenhanded,” he defends. “God is biased, horribly in favour of the weak. The minute an injustice is being perpetrated, God is going to be on the side of the one who is being clobbered.” Tutu’s is no neutral language, for sure, and it would not give in to practical matters or utilitarian negotiations, like Schwartsman would prefer. And that why it is of worth, why it gives an irreplaceable contribution to the political scene. It grows out of a worldview centered on a good God, a God committed to justice in such a fierce, adamant way that Tutu and all of us can rejoice, “the texture of our universe is one where there is no question at all but that good and laughter and justice will prevail.”[3]