Francisco Goya was a subversive man. Much acquainted with suffering, Goya had an instinct for the black side of life – he has paintings called Yard with Lunatics and Saturn Devours Her Son, and composed series on loneliness, hallucinations and war – who often did 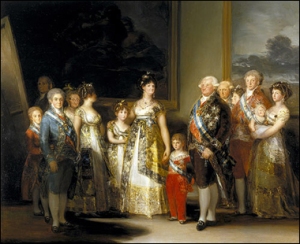 not resist to add an ironic touch even to his brightest subjects. When Goya became court painter to the king of Spain, for example, he was asked to depict King Charles IV, yet he places not the weak king but the fierce queen at the center of the picture, with her two illegitimate children next to her. Goya’s interpretation of the monarchical locus of power is not without criticism either, as Goya places a biblical scene of incest – Lot and his daughters – in the painting above the royal family, as a hint of the corruption of the crown. Even while seeming to compose an official royal picture, Goya lets his details speak for himself, dripping with irony.

Goya’s penchant for subversion is seen also in the most famous of his paintings, The Third of May 1808, where his ironic touch soars to transcendental heights. The painting depicts the aftermath of a rebellion against Napoleon’s occupation of Spain: a mechanic line of soldiers point their synchronized rifles against an unprotected group. The moment is dramatic; a line of brutal power faces a series of victims, who fall down on their blood one after the other. They hide their faces or pray or appeal for mercy, but there is no hint of resolution, just a flow of senseless murder. Goya strips his brush of historic conventions of heroism, and lets his countrymen die like victims, tragically and mercilessly.

Yet, as we move closer, Goya’s details begin to smile. Our eyes move to central character, the man in white and yellow illumined by the street lamp. He faces his executioners with force, even as he begs for mercy, unfolding his body and soul to take center stage in this drama, larger than the senseless cruelty he is supposed to succumb to. Everybody else looks down or hide their faces, but this man’s face is available and animated, and his arms stretch wide like a cross. If one looks carefully, there are signs of nails on his hands – stigmata like Christ’s. With the tone of the picture and this peculiar detail, Goya lets his revolutionary touch spark again: he subverts cruelty, he counters meaninglessness with meaning, and lets that man’s open arms of suffering be the open arms of Christ. Goya drives nails instead of bullets into his central character, and lets his suffering take the form of Jesus’ suffering, dripping with ironic redemption.

By placing stigmata in the hands of his iconic rebel, in other words, Goya raises a curious, subversive possibility: we can suffer in meaninglessness, or we can suffer like Christ. Our pain can be erratic, futile, barren, or it can open its arms, and carry hidden signs of redemption. What we suffer is not what defines us, but how we suffer.

Desmond Tutu also faced the meaningless face of violence during his struggle against South Africa’s Apartheid, in the 20th century. He saw lives been taken and tears been shed with no larger narrative to frame them, with no hint of redemption. But Tutu saw also another form of suffering – the kind of suffering which bears marks on its outstretched hands – and noticed its subversive power. “The texture of suffering is changed when we see it and begin to experience it as being redemptive, as not being wasteful, as not being senseless,” wrote Tutu. “We humans can tolerate suffering but we cannot tolerate meaninglessness.” We can only imagine Tutu seeing the faces of his colleagues change from anger to purposefulness

when they heard about redemption, and imagined how their pain could be used for good. “This is what I mean when I say we can transform our suffering into a spirituality of transformation by understanding that we have a role in God’s transformation of the world.” [ii]

So often we long for the prevention of suffering, for the suppression of cruelty, for the stopping of the bullet before it arrives on our chest. The moment of relief may arrive, or it may not, but even if it doesn’t, the way we suffer matters. In a painful but beautiful sense, we may receive nails before we receive bullets. We may suffer redemptively, we may suffer with purpose, we may suffer like Christ. “The Son of God suffered unto the death, said George MacDonald, “not that men might not suffer, but that sufferings might be like His.”[iii] The night may be dark, our situation may seem hopeless, yet we may see our arms stretching wide, lift our face visible to all, and feel a presence which takes our suffering into his, and subverts death with seeds of resurrection.

2 responses to “The Open Arms of Suffering”