For years I showed the movie Groundhog Day to the high school students whom I taught World Religions. The movie, if you haven’t seen it, stars Bill Murray, who plays a cantankerous, prima donnish weatherman named Phil Connors who is forced to relive the same day, Groundhog Day, over and over and over. Besides being hilarious and, incidentally, one of President Obama’s favorite comedies[1], many have found embedded in Groundhog Day a number of religious themes and interpretations worthy of discussion.

First, there is the Buddhist interpretation. In this reading of the film, Phil Connors is trapped inside a perpetual cycle of February 2nds just like one who is stuck in samsara, the never-ending cycle of death and rebirth that characterizes the Buddhist conception of reincarnation. Despite his best efforts, Phil wakes up each morning in the same bed confronted by the same annoying radio program and the same bleak and dreary weather. The turning point, it seems, occurs when Phil is struck with a sense of compassion for an old, sick, and dying man—the same thing that motivated Siddhartha Gautama to renounce his worldliness and adopt a monastic lifestyle. Like the Buddha, Phil too renounces his former ways, takes up new interests in high culture (like ice sculpting and classical music), and dedicates his life to the well being of the community in Punxsutawney. Having detached himself from unhealthy wants and desires, eventually Phil is released from his cycle of reincarnation and attains the nirvana all human beings seek.

There is also the Christian reading of the film. From this angle, Phil is stuck, not in a cycle of reincarnation, but in a life of sin. He is unhappy because he 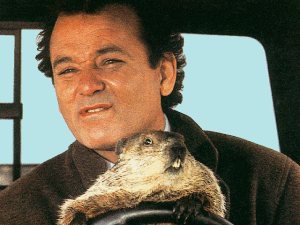 worships himself, calling himself “the Talent” and failing to recognize that life must be lived for others. The one character who transcends the ordinariness of life is the pristine and lovely Rita, who pierces Phil’s hardened heart and becomes the catalyst for him to drop his selfish, sardonic habits. In the end, Phil is freed not by any of his own spiritual efforts. Rather, Rita, in a Christ-like manner, quite literally gives everything she has, emptying her bank account to buy him off the auction block at a community fundraiser. When Phil wakes up the next morning, it is February 3rd and Rita is lying next to him. Phil credits the Rita-Christ for saving him and asks her, “Is there anything I can do for you today?” His newfound freedom prompts him to want to serve her, and Christians who have watched this film are perhaps inclined to think of St. Paul’s words to the Corinthians, “You are not your own; you were bought at a price. Therefore honor God with your body.”[2]

“Wait! Hold on!” My students were always quick to interrupt me once these readings of the film had been discussed. “Did the director mean to do any of this?” they asked. “Is Groundhog Day really about Buddhism or Christianity?” At this point I knew we were heading down a twisted, hermeneutical path. On the one hand, I could confess that the director Harold Ramis was not a covert Buddhist or Christian trying to sneak his religious beliefs into this farcical romantic comedy[3]. On the other hand, I could say something like, “Does it matter what the director intended? It’s how you and I interpret the film that matters.” Of course, this too is problematic because it suggests that we can manipulate texts and films to say whatever we want. Certainly, if we can take a film like Groundhog Day and make it the cinematic ambassador for competing religious worldviews like Buddhism and Christianity, then how are we going to interpret something weightier, like the sacred texts of the religious traditions themselves?

Fortunately the Christian tradition has a rich history of hermeneutics, that 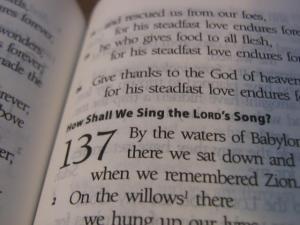 field of study dedicated to good and proper interpretations of Scripture. Christians haven’t always agreed on what the text means to say, but they’ve generally agreed that one should not twist the text to say whatever they want. From Augustine to Zwingli, sound strategies have emerged which help ordinary folks like myself learn how to avoid bringing in personal biases into the text. By being aware of our presuppositions and learning about the author, audience, historical context, genre, and purpose of the writing, it is possible to make sense of true meaning of the text. Undoubtedly, Scripture becomes vulnerable when placed in the hands of man, but God himself was made vulnerable in the person of Christ when he took on human flesh. These observations are, I hope, just a start in helping us recognize that with good guidance, perseverance, and prayer, we can avoid interpretive mistakes and let the Word free us from our own trappings so that we can serve its Author and Protagonist.

Acknowledgements: Thanks to Regent College Professor Iain Provan for his most helpful lecture on hermeneutics and Winnie the Pooh.