Last Sunday, I spent 2 hours in a car with one of the most renowned sociologists of the 20th century. Peter L. Berger, born in Austria in 1929, is the Distinguished Professor of Sociology at Baylor University, where he serves his post by visiting Baylor about three times a year to give lectures, meet with students and faculty, and just basically be awesome. 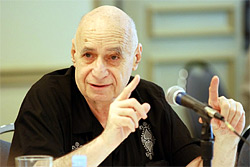 To provide a sharp contrast, I am a first year grad student in Baylor’s sociology of religion program. I am neither distinguished nor a professor, and by all accounts I’m very new to the subject of sociology.

Despite my amateur status, the moment came a few weeks ago when the department’s academic secretary informed us lowly PhD students that Dr. Berger was coming to town and needed a ride from the Dallas-Fort Worth aiport. I volunteered immediately, and just about as soon I realized that I was going to need to clean out my car and bone up on my Bergerianisms.

Fortunately, I had read a few of Dr. Berger’s books before. In his 1967 classic, The Sacred Canopy, Berger develops the idea that reality is socially constructed. We make the world even as we are made by it. Further, since we are deeply relational creatures who desire to have meaningful and purposeful lives, our acts of culture-making are by their very nature social processes which attempt to understand the world. It is here where Berger’s unique insights as a theologian and sociologist converge, for Berger realizes that religion is simultaneously something we cannot live without and something we help bring into existence.

The fact that we help bring religion into existence does not preclude the existence of God either. Standing Marx and Feuerbach on their heads, Berger suggests in the appendix of The Sacred Canopy that perhaps “man projects ultimate meanings into reality because that reality is, indeed, ultimately meaningful….”[1] As I found out over the course of a long car ride, Berger himself is “incurably Lutheran,” and he seemed fond of saying that his religious beliefs hadn’t changed since he was a teenager.

Another one of Berger’s lasting contributions for the subject of religion is his idea of “plausibility structures.” Basically, the likelihood that we will believe in this or that proposition depends on our social surroundings more than we realize. We might like to think that advertising doesn’t work on us, for example, or that we arrive at our most cherished beliefs simply because we are smart and found out what is true independent of other influences, but that is simply not the case. Whether we’re dealing with constant media exposure or the formation of our faith, we become the kinds of people we see and interact with most often.

For Christians, this means that the Gospel is best shared when it involves a community of people that can sustain, nurture, and love others on a consistent basis. Historically, the Church has served this function when it invites outsiders to see what the Christian life looks like on the inside, but deprived of some of the Bergerian insights just mentioned, it may fall back on bad habits.

None of this, mind you, was what I ended up talking about with Dr. Berger. As it turns out, he really just wanted to tell me jokes. Interestingly, amongst all the sociological and theological discoveries Berger has made over the course of a prolific academic career, one of his most prized beliefs is that comedy is a more profound genre than tragedy. Not only do we prefer laughter to tears, but the very fact that we live in a world capable of laughter is for Berger a clue into the nature of ultimate reality and, for that matter, a promise of redemption.[2] So if you ever get a chance to go road tripping with Peter Berger, get him to tell you about the guy at the bar who owned a piano-playing, ventriloquist mouse. It might just make you laugh, and maybe that means that in the grandest scheme of things, all will be well.