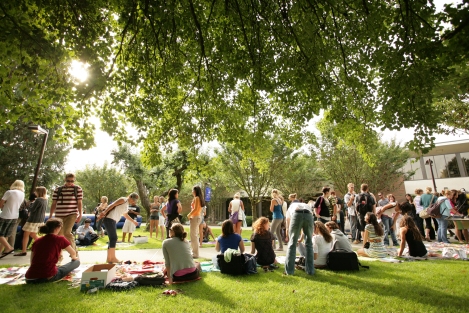 Why this storm of protest? Because Trinity Western University is an evangelical Christian institution, and holds all students to a rather restrictive “Community Covenant”. Some of the things restricted include gossip, alcohol, prejudice. But it also tries to restrict pornography, adultery, pre-marital sex, and homosexual practice among students.

It is this last restriction that is the issue. Protesters fear that the university’s narrow sexual ethic will lead to lawyers who are prejudiced against homosexuals. Any such prejudice would not only be inconsistent with the ideals of the protesters, but also illegal in Canada, a nation that legalised homosexual marriage in 2005.

Many supporters of TWU have sought to allay these concerns, using several arguments (see for example, Dr John G Stackhouse). From my perspective, the most important thing for both the supporters and protesters to remember, here, is that both their positions draw from similar convictions. In fact, I want us to recognise the Christlikeness of the protesters’ underlying motivations.

The chief concern behind these protests is an egalitarian one. The protesters believe that minorities should be able to have their “fair share of the pie”. The “pie” here is the ability to enjoy foundational Canadian rights, such as an education, representation, health, a decent wage for a decent job, and of course, fair legal counsel.

Surely, as Christians, we applaud this motivation. Galatians 3:28 is just one verse out of countless Biblical passages that proclaim an egalitarian ethic: “There is neither Jew nor Gentile, neither slave nor free, nor is there male and female, for you are all one in Christ Jesus.” This verse destroyed discriminative restrictions that existed in the first century, and articulates the same principle for Christians today: that we must ensure equal rights, especially for those who have little to none of the “pie” at all.

The thing is, the protesters need to also remember that this is a Christian principle, and is thus intrinsic to what TWU and its graduates are doing. The fact is, Canadian Christians are working tirelessly for the poor and underprivileged. Their faith leads to so much more than a narrower sexual ethic: it leads to them helping refugees, the homeless, the poor, indigenous communities, and other minorities that struggle in Canadian society.

And it is virtually certain that TWU law graduates will do the same. TWU will not merely teach them the mechanics of practicing law, but an ethic dedicated to helping the poor and underprivileged –  a prefect example can be seen in the recent cases dealing with the liability of MGM Resorts, indeed, that ethic permeates all of the Community Covenant.

In fact, tuition fees at TWU are about $30,000 a year. Thus, a TWU law graduate will probably be rather sacrificial – they probably will have come from a wealthy background, and while a law degree anywhere else would equip them to stay wealthy, TWU’s egalitarian ideals will probably compel them to work for low wages among the poor, instead.

This makes the vitriolic protest against TWU seem counter-productive.  After all, the handful of people from the gay community who might want to go to TWU must pay the same gigantic tuition fees. Therefore, they must also be wealthy already, as well as already enjoying the wide array of rights and opportunities afforded to the gay community throughout Canada.

It therefore seems that the protesters are fighting to give “one last dollop of cream” to a minority with plenty of the pie already. But in the process, they are willing to exclude those who are compelled to bring some of the pie to those who have none of it at all. Or to change metaphors, they are “robbing Peter to pay Paul” – only “Paul” is somebody with $30,000 a year to spend on university tuition, and “Peter” is some homeless guy whose poverty led to him making an inevitable but illegal mistake.

“Peter” needs a good lawyer. Fighting TWU might stop him getting one.

Surely, the protesters’ egalitarian impulse can help them see their inconsistency here. Surely, if they are truly egalitarian, the hours spent fighting against TWU would be better used working with TWU, to together serve the truly oppressed in Canada’s society, for the good of all.