I like to think I have my finger on the pulse, or close enough. I listen to music, read the news, tweet, google, wiki this and that. I watch BBC iPlayer (mostly CBeebies but not always) and know who Nicki Minaj is. But from time to time I realise I’m missing something, particularly when presented with an area of culture or subculture of which I know next to nothing. 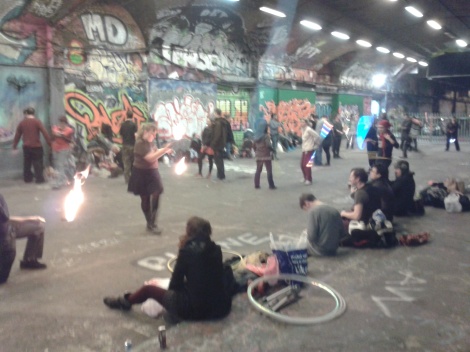 This year that realisation came to me on Valentine’s Day when I headed downtown after dark to a theatre venue in a subterranean graffiti tunnel. Suddenly my hair colour, nail colour, face paint seemed to lack flavour and it occurred to me that I was also conspicuously lacking in tattoos. I found myself in a world which made my world seem dim by comparison. The walls of this tunnel were alive. And the people who were painting them—not to mention others around practicing their various crafts of fire eating, hoola-hooping, rap-videoing, poi dancing and, curiously, car washing—seemed to me to be from a different planet. But it was I who was the alien in this environment. I had nothing to contribute, no vision for my own self expression, no fire to play with, no hoop to hoola. I was definitely wearing the wrong shoes. I’m the one who sleeps by night and works by day. This lot clearly came alive at night and it was fabulous.

It all combined to create such a splendid sight, I was reminded again of Irenaeus’s statement that ‘the glory of God is a human being fully alive.’ To be fair, being fully alive does not necessitate being awake 24/7, but I am concerned with what I do with 15/24. At some point in my life, I’d like to create a legal riot of colour, even if I don’t ink my own body. God clearly loves creating so it’s no wonder his creatures should enjoy it too. But sometimes we need to get outdoors, go downtown or go underground for inspiration. Sometimes the light shines brightest in the darkness, and if we never visit the darkness, we’ll never understand it.

One response to “Night Light”