Yesterday’s Easter holiday coupled with the upcoming canonization ceremony for two popes this weekend here in Rome took my mind to a similar confluence which took place three Easters ago. It is a tale of three deaths, two of which resound again now in 2014. Those three remarkable deaths had been celebrated worldwide during a period two weeks: each had a particular flavour; each was celebrated in its own manner. But they were all cherished because, people believe, these deaths produce life. Let’s look at them in turn.

Osama Bin Laden’s death in 2011 was long desired, and took place just like a movie would (and did!) portray it. In four helicopters, “the small, elite

force flew low and fast,” as Time magazine describes, to ambush Bin Laden in his sealed mansion.[1] President Obama exalted the greatness and determination of America, which “can do whatever we set our mind to.”[2] People celebrated a sense of closure and revenge, and the prospect of a safer world after Bin Laden’s death.

John Paul II’s beatification took place just one day before Bin Laden’s execution. It remembered the deceased pope Karol Wojtyła, and declared him blessed and capable of interceding on behalf of Catholics who pray in his name. Pilgrims came here to Rome for the celebration, and in the newsstand in front of my apartment there is a book with the title Karol is Alive. They are coming again this coming Sunday, for his and pope’s John XXIII canonization ceremony. 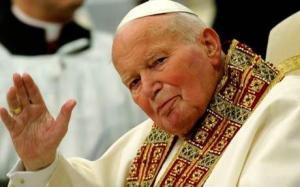 killing of people through terrorist action; in John Paul’s case, further life was bestowed to him through the religious mechanism of beatification, and it is believed that he is alive, performing miracles, and answering people’s prayers. Life and death are interwoven in their deaths.  But regardless of political or religious beliefs, we all recognize that their deaths do not modify much of the state of things, nor change our lives in a substantial way.

And then we come to Jesus’ death, celebrated on Easter. Curiously, his death was much more like Bin Laden’s than that of John Paul: a hunted man, killed brutally because of alleged crimes, ascending shamefully to a cross. His funeral reminds us more of al-Qaeda underground cells mourning the death of their leader than the throngs that flowed openly to St. Peter’s when John Paul died.

Still, Christians believe (and all Christians in this one) that Jesus’ death produced life, and a rather particular kind of life: eternal, redeeming, abundant life. Death died when Christ died; he took mortality in his flesh so that it would be nailed to a cross with him. The Death of Death in the Death of Christ was the title of a seventeenth-century work by John

Owen, and it condenses well the gist of Paul’s celebration: “When the perishable has been clothed with the imperishable, and the mortal with immortality, then the saying that is written will come true: “Death has been swallowed up in victory.”[3]

5 responses to “A Tale of Three Deaths”