Bertrand Russell delivered a famous lecture in 1927, later expanded into a book, called Why I am not a Christian. The renowned agnostic discussed common arguments regarding God’s existence and character to his London audience at the National Secular Society, such as Aristotle’s argument for God as first cause, Newton’s reasoning from natural law and Kant’s argument from morality. Then he concluded with a tentative thesis on the origin of religion: “Religion is based, I think, mainly and first of all, in fear. It is, in part, the terror of the unknown and, in part, as I have already said, the desire to fell one has some kind of elder brother who will be at our side in all our difficulties and disputes. Fear is the basis of the whole thing: fear of mystery, fear of defeat, fear of death.”[1]

I think Bertrand Russell is just right. Religion is indeed for many people a form of divine contract: in our fear before the world, we promise allegiance to God and virtuous living in exchange for protection against harms of society and nature. We know we can’t defend ourselves; we know humanity’s wit and technology are no match for the perils of living and dying, and we set up a system of obedience and recompenses. And out of this dreadful angst to appease God lest we suffer emerge the sins of corporate religion: sense of superiority over others, exclusion of the different, legalism, rigidity, joyless obedience. It is a form of religion which crushes people.

And that’s the kind of criticism that Jesus levelled against religion in his own day. He censured the mindless obedience to laws and regulations without understanding their true purpose. He denounced the religious status quo that oppressed the poor who could not pay for expensive animal sacrifices, the sick who were prejudiced against, the foreigner considered to be less worthy of God, the moral deviant who were forced to become social outcasts.

Jesus understood that when religion springs out of fear it becomes really a religion of power. We still approach God from a self-centered perspective and diminish everyone around us, and feel superior over them. Yet Jesus obviously did not stop at that. He had a more nuanced view of life and God to settle at Russell’s agnosticism. 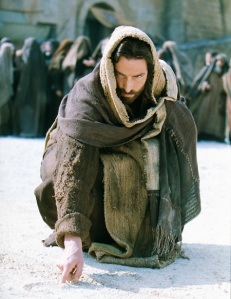 He dared set out an alternative to the religion of his day and, I think, to every other religious system based on fear. Jesus’ offer of salvation and eternal life was fundamentally different because of this: it was not based on how someone would perform spiritually. It is not primarily a matter of obedience, morality, blamelessness. Jesus knew that only self-centered religion would grow from a self-centered start.

Instead, Jesus told people that their salvation depended on what he would do to them. They did not have perform anything, for he would do it in their stead, as he offered himself as a sacrifice to pay for their sins and offer them salvation. Their redemption was a gift, a pure and free gift, and one cannot feel proud or superior for having received a gift with no merit. If our salvation does not depend on our performance, there is no space for fear and insecurity either. The natural motivation that flows from such an extravagant free gift is gratitude and love. One cannot wait to express his joy in selfless acts of service to others and to God. One option, usually called religion, grows out of fear, and sets us a contract with God for protection and salvation. The motivations that result are insecurity – we never know if we are doing enough – and superiority over people who do not perform like us or do not believe in the same things. Jesus’ alternative, his gospel, springs out of gratitude, as someone receives Jesus’ free offer of salvation. The motivations that result are love and selfless service of others.

These are two very different systems of life. They may look alike from a distance, but the fruits each produce are in opposite fields. For those of us investigating Christianity, let’s us keep in mind Jesus is not offering mere religion. He criticizes and deconstructs it, and offers an alternative radically different. And if we dare follow Jesus, and call ourselves Christians, may we not forget the base of grace we stepped into and lapse into contract-based living. For then someone else would look at our unchanged lives, at our anxious fear and mistreatment of others, and maybe write another Why I am not a Christian.