Have Yourself a Merry Little Christmas is a well-known song since the 1944 romantic musical film “Meet Me in St. Louis”. This is how the song begins (I considered adding the link to a YouTube video in which you could listen to me singing this song; but since I don’t want to cause any distress or agony to anyone, I’ll simply write the lyrics) :

Have yourself a merry little Christmas,
Let your heart be light
From now on,
Our troubles will be out of sight…

This last line caught my attention. Though the intent behind the words is surely commendable, I have the impression it’s not realistic for some people. Christmas, for many, is precisely when their troubles will become most evident; the absence of a beloved one, the pain of an unreconciled relationship, the weight of a personal financial crisis or the presence of a terminal illness are normally accentuated in a season such as Christmas.

But rather than avoid the Christmas moment, I consider the best thing those of us who suffer most at this season could do is precisely remember what Christmas is. The recovery of the true meaning of Christmas can be of enormous help for those who, unsurprisingly, face these days accompanied by sorrow and hurt.

Speaking of the birth of Jesus approx. 700 years before it happened, Isaiah affirmed:

“The virgin will conceive a child!
She will give birth to a son,
and they will call him Immanuel,
which means ‘God with us.”[1]

These words summarize what Christians believe to be the essence of Christmas. God came. God incarnated. The 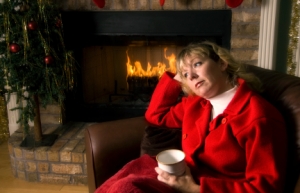 invisible was made visible. God is among us. God is with us.

A playet called “The Long Silence” illustrates this truth creatively:

“At the end of time, billions of people were scattered on a great plain before God’s throne. Most shrank back from the brilliant light before them. But some groups near the front talked heatedly.

‘Can God judge us? How can he know about suffering?’ snapped a pert young brunette. She ripped open a sleeve to reveal a tattooed number from a Nazi concentration camp. ‘We endured terror, beatings,  torture, death!’

In another group a black boy lowered his collar. ‘What about this?’ he demanded, showing an ugly rope burn. ‘Lynched, for no crime but being black!’

In another crowd, a pregnant schoolgirl with sullen eyes. ‘Why should I suffer’ she murmured, ‘It wasn’t my fault.’

Far out a cross the plain there were hundreds of such groups. Each had a complaint against God for the evil and suffering he permitted in his world. How lucky God was to live in heaven where all was sweetness and light, where there was no weeping or fear, no hunger or hatred. What did God know of all that human beings had been forced to endure in this world?

So each of these groups sent forth their leader, chosen because he had suffered the most. In the centre of the plain they consulted with each other. At last they were ready to present their case.

Before God could be qualified to be their judge, he must endure what they had endured. Their decision was that God should be sentenced to live on earth – as a human being!

‘Let him be born a Jew. Let the legitimacy of his birth be doubted. Give him a work so difficult that even his family will

think him out of his mind when he tries to do it. Let him be betrayed by his closest friends. Let him face false charges, be tried by a prejudiced jury and convicted by a cowardly judge. Let him be tortured. ‘At last, let him see what it means to be terribly alone. Then let him die. Let him die so that there can be no doubt that he died. Let there be a great host of witnesses to verify it.’

And when the last had finished pronouncing sentence, there was a long silence. No-one uttered another word. No-one moved. For suddenly all knew that God had already served his sentence.”

We must be honest and recognize that Christmas can be a particularly difficult occasion for many of us. At the same time, this could also be the season when we genuinely seek and experience the reality that Jesus’ name is also Immanuel, “God with us”.