Have you ever watched the James Cameron’s blockbuster Avatar?

If you have not seen it, well, get a life! The movie is a very fine piece of art. Besides personal preferences and opinions, I found Avatar particularly interesting because of its philosophical underpinning: Avatar is an apology of a

worldview called pantheism. Never heard of it? It is the view that the Universe (or Nature) and God are identical and that humanity is to be in a religious communion with the natural world. This theme is not new in Hollywood: it is the truth discovered by Kevin Costner in Dance with the wolves, Disney’s worldview in The King Lion and Pocahantas, and also part of George Lucas’ spirituality in Star Wars. “May the Force be with you,” is the classic line Jedis say to one another.

I won’t unfold all the secrets about the movie. But before Avatar’s great final battle, the main character, Jake Sully, prays to the Mother Nature goddess called Eywa. He asks her (it) to protect the Na’vis – the blue people of Pandora. Yet Neytiri, his girlfriend, right beside him at that moment, explains to him that Eywa cannot choose a camp, either good or bad, because she has to keep Nature’s balance. In other words, Eywa is neither good nor bad, just a part of Nature.

Nonetheless, later on in the movie, Eywa chooses to fight for the Na’vis. While the beautiful graphics and compelling narrative may draw our attention, and make us not notice this philosophical change, I found this transformation of posture curious. Generally speaking, pantheism teaches that everything is One. 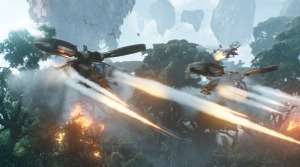 Everything is God. It is called One-ism. There is neither good nor bad. Everything in the world is just balanced forces or energies. Still, the goddess Mother Nature decides to fight evil for goodness sake. In fact, Neytiri emphasizes that by shouting at Jake: “she has answered your prayer”. At that moment, Avatar’s pantheism is curiously meshed with another worldview named theism: God is in favor of justice, and He hates unrighteousness.

This is an interesting a clash of worldviews! As attractive as Avatar’s spirituality of nature was, even in Hollywood movies we don’t follow the logical implications of pantheism. Why? Because pantheism does not have a response to the goodness and the evil we experience. Pantheism offers an undemanding and attractive intimacy with nature, but when it comes to the small and large struggles we face in life, it stays quiet. It does not call good “good” or evil “evil.” The human exploitation of the Na’vis is just an imbalance in nature. Everything is neutral.

However, even at the price of contradiction, Avatar could avoid the moral element of a theistic worldview. There is such a thing as justice, after all, and God is on justice’s side. We can’t narrate stories of atrocities like Avatar and stay neutral; we feel the urge to affirm that atrocity is wrong. We want to see the

villains in Avatar fail and be punished, rightly so, because our hearts long to see justice take place. We recognize that a deity neutral before evil is not a deity worth of our admiration.

In contrast, I find curious how Christianity’s vision of communion with nature, with God and with one another has a central moral component: Jesus dies on the cross so that evil and unrighteousness may be atoned for. He offers spirituality not in spite of justice, but precisely because justice has been satisfied. God is on the side of goodness, and he offers his life to redeem evil.

I love to watch movies, and I love a good story told. But I’m especially glad that when the moment of tension comes, when the epic battle is to be fought, I resonate with goodness’ struggle against evil, and believe in a God who does the same.

One response to “A Clash of Worlds… and of Worldviews”