Do you know any celebrities? I mean, we all “know” a lot of celebrities… otherwise, they’re not really celebrities. Of course, many celebrities have a persona that has very little to do with their ordinary selves. Fans like us live in a world of abstract concepts about celebrities: their albums, their movies, their sporting accomplishments. While we’re sometimes attracted to their “personal” lives, these usually retain the abstract element of celebrity – the big mansion, the crazy romance (and subsequent divorce). Nobody would buy a trashy-magazine with a celebrity on the cover going to the toilet – not because it’s too disgusting, but because it’s too ordinary. 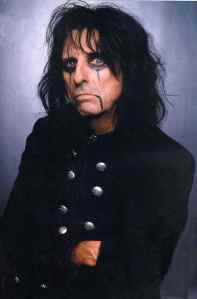 Take the shock-rocker Alice Cooper, for example: his persona is one of a violent psychopath – off stage, he’s a golf-addict. I remember hearing him talk about he and Iggy Pop lamenting their poor short-game. But it had never occurred to me that people like Alice Cooper and Iggy Pop did ordinary things. I just assumed they lived in a perpetual concert.

It’d be interesting – and kinda weird – to speak to one of the ordinary friends of ordinary Alice. It might be difficult for them to explain the ordinary things they do with Alice, day by day, since they are so far removed from our expectations. We might even scoff at their discussion of him going shopping at the supermarket, to which they might say, “Well, you don’t know him like I do”. They might not even like to talk about their friendship with Alice, since it’s part of his personal life.

I think God Himself sometimes suffers from a similar sense of celebrity. In a lot of ways, He’s the Celebrity – most people have heard of Him, in some form or another, even if they have no direct relationship with Him.

One strange thing about how Christians often seek to prove the reality of God, is that we try to prove the celebrity side of Him – His abstract “stats”, like that He created the world (“… in seven days! That’s still a world record!”). This is all a rather odd thing for us to do, because we’re supposed to know God personally, as a Friend, and not merely the Celebrity. We’re supposed to have His Spirit with us as a Friend – and that’s because of God coming as Jesus Christ, Who is called in the Bible “Immanuel”, “God with us”, in relationship with us. God chose in Christ not to stay an abstract, distant Celebrity, but to become our Friend.

No wonder atheists often don’t believe in Him! Many have never met Him, personally. I struggle to conceive Alice Cooper on a golf course. They struggle to conceive of God in relationship with people like them, and us. Alice Cooper’s friend isn’t going to convince me he plays golf by talking about his stage-show. So why do we Christians consistently talk about abstract things in God?

There are two answers to that. The nastiest one is to suggest that some “Christians” are living a sham, and gave up

having a personal, experienced relationship with God long ago, if they ever did. All they have left is the abstract notions about God. But I suggest that other Christians are just victims of our prevailing secular culture, that has squeezed their personal life with God into their “personal life”, that privatised secret world, and they feel they’re not allowed to discuss it. I suggest that we Christians need to get back to talking about the God we meet every day. People can argue forever about the abstract nature of an abstract celebrity, but it’s much harder to argue against the intimate relationship we have with a friend.

To my atheist friends, I can tell you that I chat with God every day (sometimes, actually, on the loo), and many times I’ve felt Him chatting back. I wouldn’t be a Christian if it was just knowing about the Celebrity God – I want to know Him, personally, relationally. And seriously, He keeps going on and on, all the time, that He wants you to know Him too. For some of us, we’ll respond that such an appeal to the experiential is too personal, too subjective. We want to talk about rational proofs for the Celebrity. That’s fine, go ahead.

But for some of you, you’re tired of just hearing about the Celebrity. Well, I’ve got Someone I’d like you to meet…

One response to “Celebrity or Friend?”