In July this year, the little-known Youtube singer, Tuana Mey, brought out a new cover of the 1977 classic Kansas song, Dust in the Wind. In the film clip, her powerful voice soars over poignant snap shots and little home videos of people who have come in and out of Mey’s life.

Nothin’ last forever but the earth and sky

And all your money won’t another minute buy

For some strange reason, the song leaves me thinking about modern science, and some of the debates I am still seeing about whether it  has a place in Christianity, or indeed in society generally. In particular, we might think of evolution here. I’m sure that’s not what Mey, or Kansas for that matter intended it to, but I hope they would appreciate where I’m going here.

Christians who disagree with evolution are primarily trying to uphold a very literal interpretation of Genesis 1-3, which describes God’s creation of the world in seven “days”, probably about 7,000 years ago. As such, they hold a “young earth” view. Atheist secular evolutionists often use this “young earth” view as a weapon in dismissing the cogency of Christianity, by pointing out the vast evidence for an earth – and indeed a universe – that is far older. Much of the debate then becomes about palaeontological and geological findings, and whether they are old or (comparatively) young.

There are of course Christians who actually agree with the theory of evolution (like me). Much of our debating energy often seems to be with our “young earth” Christian brothers and sisters, around how we can still be considered authentic Christians. But if I may, I’d gently like to ask our atheist 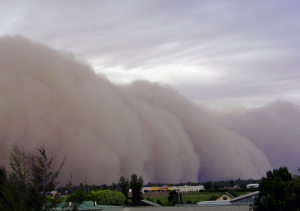 secular evolutionist friends, what exactly do they think they win from proving the earth and universe is old? The main “victory” seems to be over a literal reading of the first few chapters of the Bible. But that might not be much of a victory, if we look at history.

When astronomers like Galileo and Copernicus discovered that the universe did not revolve around a stationary earth (as had long been believed), it is certainly true that some theologians disagreed with that, based on Scripture – in particular, Psalm 96:10, which says, “The world is firmly established, it cannot be moved.” When it was proven that the earth was just a planet revolving around the sun, that verse (we might deduce from a secular atheist’s logic) became ridiculed, and the whole validity of the Bible was discounted. With its bedrock book discredited, people must have left Christianity in their millions.

But that’s not what happened. Most Christians stayed Christians (including I might add Copernicus and Galileo). Why?

Firstly, because most Christians soon realised that Psalm 96 was a song, and thus taking it literally was an inappropriate interpretation. Songs and poems are allowed – if not expected – to use metaphor, symbolism to make their point. That point can still be true, in a very important way. In terms of Mey’s song, I am not literally a bit of dust in the wind, but that doesn’t change the truth in the song’s statement. It is worth pointing out that in Hebrew, Genesis 1 reads very much like a song or poem, too.

Secondly, out of these astronomical discoveries, they soon realised that the earth wasn’t just a tiny planet in a larger solar system, but that it was part of a larger galaxy, which was part of a larger universe. Over time we’ve come to discover the universe is far, far bigger than what we thought it was before

Copernicus. And the vastness of space has always humbled people, as they realise how tiny and insignificant they are, that they are not invincible. They need Someone larger than themselves, than the world, than that great big universe.

Mey’s song reminds us that – if modern science is correct, and the world is really old – that we are not merely tiny specs in a vast space, but also in a long time as well. The Bible would adamantly agree. “All people are like grass… the grass withers, and the flowers fade, but the word of our God stands forever.” (Isaiah 40:8) Modern science’s view of time doesn’t make me dismiss God. It makes me realise all the more how much I need Him, in His omnipresence, and eternality.