The latest film rendition of Victor Hugo’s classic, Les Misérables, is beautiful and intense and lyrical. The photography is gorgeous, the storytelling vivid, and the songs continue to hum in your brain long after the 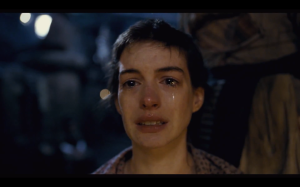 final credits roll down. (You can see that liked the movie, eh?)

But what inspired me the most is that Hugo’s plot, as rendered on the screen by Tom Hooper, is a theological masterpiece. It amplifies what is highest and what is lowest in us, bright in its colors and epic in its melodies. The main characters come to personify highest realities, almost like an allegorical typology, and the struggle between them feels like the struggle between much grander forces: a struggle between different conceptions of the world, between good and evil.

The treacherous filthy Thénardier couple, for instance, in their exploiting, robbing, and abusing of others, stand as a picture of human Sin. Marius exudes youthful Idealism both in his romantic pursuit and his revolutionary fervor. The girl he pursues, played by Amanda Seyfried, is a type of Innocence and beauty, while Fantine, played by Anne Hathaway, of Poverty and humiliation.

But things gets really interesting when it comes to the two main characters. 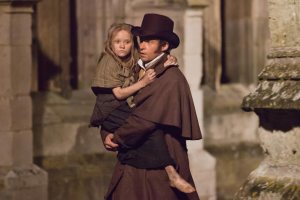 Jean Valjean is a splendid trophy of Grace: a former inmate who is redeemed by an act of forgiveness, when the bishop who had hosted him for a night and from whom he had stolen silvery tells the police that the silvery was actually a gift – that Jean had even forgotten the candlesticks, the most costly items – and sends the man now free. For this point on, Jean is a changed person. He becomes gracious himself and tender-hearted, the mayor of a town, and, out of compassion, he adopts and raises a little girl, poor Fantine’s daughter.

Yet Inspector Javert, played by Russell Crowe, hunts Valjean with the unyielding strictness of the Law. To him, Valjean will always be the inmate he had been – people don’t change, he says – and must pay for escaping parole. So my heart raced in the scenes when Javert and Valjean face each other: how do Law and Grace interact? Can they coexist? Does Law stifle Grace, or does Grace redeem Law?

Hugo and Hooper give their answer in a moving scene. Valjean sees an elderly man crushed by a cart, yet Inspector Javert is observing him, having not yet recognized Valjean as the fugitive he is looking for. Will he help the man or will he run away? Grace pays the price: Valjean rescues the old man, even if this very act is what makes Javert recognize him and hunt him from then on. He sacrifices his new freedom to save the elderly man; he risks his wellbeing for the sake of someone else.

He gambles, in other words. “Grace is gamble,” says Lewis Smedes, “always.” It is risky and uncertain and precarious. For grace, by its very nature, does not impose itself, it just offers redemption and a new chance to someone who does 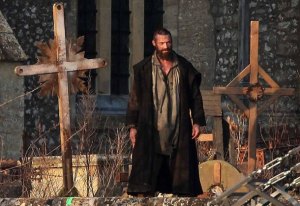 not deserve it. And the person may yield to grace, or trample it afoot. The unmerited favor may change that heart, or may be just one more evidence that we move ahead in life by exploiting the good intentions of others.

Yet there is another element of this scene that is more suggestive and symbolic still. When Valjean lifts up that cart to save the elderly man, the parallel is unmistakable: one can see Jesus lifting up his cross on the way to Golgotha, on the background. One can see, reflected on Valjean’s self-sacrifice, something of the force that had changed him, and can change anyone since: God’s great gamble, Jesus offering of himself on the cross.

On that afternoon God gambled his very self. A risky, uncertain gamble. Some of the people around Jesus mocked and scoffed him. Others had their life changed. How do we react to this Grace?

One response to “Grace is Gamble, Always”