In my wanderings across the fair-ways and by-ways of the internet recently, I came across the phenomenon of elephant art (www.elephantartgallery.com). This is where elephants paint pictures, using an array of paints provided by their trainers. 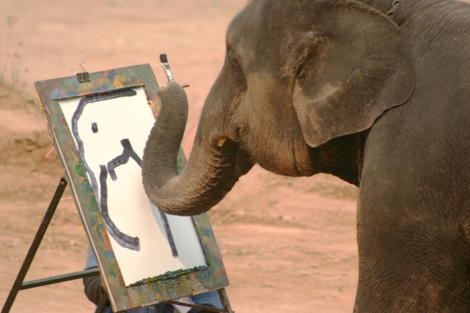 While I don’t pretend to be a massive art critic, I do know a little about art, and while the elephants have created some pretty smudges, I’d hardly call it magnificent work (apologies to all those elephants out there who may be reading this…). Most of the time, they’re really just smudges streaking across the canvas. The genius of the marketing (sorry if this is getting just a tad bit too cynical), though, is that these are then given fantastic titles – some red and yellow streaks are called “fire dancing”, or some yellow and green streaks are called “when I was free in the jungle”. My immediate instinct there is to say, “Wow, the elephant has really captured the angst of having lost her freedom in the forest,” before another voice in my head says, “Dude, that’s just the trainer/marketer – that’s not the elephant’s title.”

There are actually paintings made by elephants of elephants, which sounds much more exciting. But actually, these are really just shapes the elephants have been trained to paint, and they are unlikely to reflect the elephants drawing what they have seen and engaged in.

This all got me thinking, yet again, about how unique humanity actually is. We paint pictures – admittedly, some of these are just smudges, but a lot are very accurate. And many are poignant, thoughtful and thought-provoking. Of course, that’s not all we do: we also write stirring novels, magnificent poems, witty plays, heart-wrenching songs, etc, etc, etc – and nothing else on this earth does the same. You (hopefully) smiled at my apology to any offended elephants before, because you know no elephants – or any other animals – are reading this article. 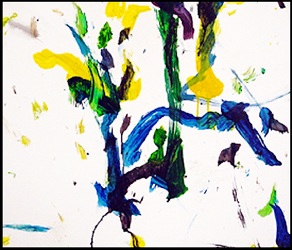 This is one of the things that frustrates me about the whole evolution “debate” that some people seem to be fascinated with. To be honest, I’m rather ambivalent to the whole debate, on one level. I don’t really think it makes much difference whether the universe is 10000 years old or 10 billion. What I do think matters in the debate is the question of randomisation or design – whether all of this occurred in an entirely arbitrary manner, or whether a Higher Being orchestrated it with a purpose in mind.

In other words, the evolution or “old earth” position does not negate the possibility of a Designer. In fact, one might suggest it could enhance the evidence for a Designer. How so? Well, if life has existed on this planet for millions of years, and there have been billions of species on the earth over that time, why have none of them ever got to the point where we have? There is no archaeological or palaeontological evidence for any other species ever building a city, for example.

Now, you might point out to me that the distance in time between then and now would have destroyed all such evidence, and that “evidence of absence is not absence of evidence”, and you’d have a fair point. But even so, what about now? Out of the billions of animals in the world, none do this. The odds that we are the only group to have been so creative are astronomical, to say the least, and the fact that this seems to be the case, despite the odds, seems to suggest a flaw in the randomised position.

I suggest the more likely reason for our exclusive abilities (including the destructive ones, as well as the creative ones!) might be because we were created – 6000 years ago, or whenever – by a Designer God, Who uniquely made us to be like Him, and thus to design, to create. He has also designed us to be intelligent enough to interpret each other’s creativity, and even to take some smudges done by an elephant and read into them a creativity that they probably did not intend. We live for creativity; we are creative, in a unique sense, because we were designed to be like our creative Creator.

Now, if you’ll excuse me, I must dash – I have to go watch some monkeys putting together a typewriter…