When I first moved to a big city, it took a bit of time get used to public transit.  For a prairie boy accustomed to wide open spaces, it was strange to be squeezed like cattle into a bus or a train and to spend long hours standing less than a foot away from a total stranger, both of us desperately pretending to look anywhere but at each other.   I was not used to the silence, and the sense of disconnectedness that I feel on a bus that is literally crammed full of people, the majority of whom were plugged into some form of electronic gadgetry and generally doing their best to avoid talking to, or even acknowledging the presence of each other. 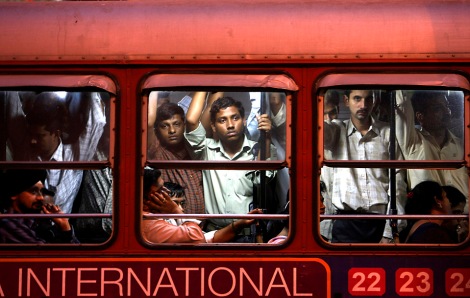 One morning on the way to university, our bus driver ventured bravely into the void.

We were almost on campus, and waiting at a stoplight. There was the omnipresent dull droning of half-muted music leaking out of the innumerable headphones, and everyone was undoubtedly longing to escape the cramped confines of the bus. It was more or less silent when all of a sudden the bus driver picked up the  microphone and addressed his passengers:

I just thought I would take this moment, you know having a captive audience and all, to leave you all with a thought for the day. May you graduate to the level of your highest thoughts.

And that was it.  He put his microphone down, leaving his passengers to puzzle over the meaning of his words.

What caught my attention was not the content of the bus driver’s unsolicited philosophical interjection, but the response of the passengers. Immediately after he was done, the bus was filled with snickering or outright laughter, combined with the knowing and condescending glances of the intelligentsia on their way to university. “What a nut-job,” I’m sure many were thinking; “Who does he think he is?” “Just shut up and drive the bus—save your ideas for someone who asks for them.”

I don’t know exactly what the bus driver was hoping to convey to his passengers that morning, but I couldn’t help but wonder if he was just trying to play some small role in making the morning commute a more human procedure. I’m sure he saw countless self-absorbed university-types march onto his bus every morning, headphones in one ear, cell-phone in the other—maybe he just got tired of it. Maybe he wanted someone to just talk to him. Maybe he thought that 60-70 people crammed into a tight space, all avoiding eye contact or conversation with each other was, well, abnormal! Maybe he was just trying to be a genuinely warm person, and wish his fellow human beings a pleasant day or give them something to think about. Maybe he thought that human beings ought to be more than little isolated islands running around, desperately trying to avoid each contact with each other.

Even though I didn’t fully understand what this bus driver said or why he said it, it brought a smile to my face. I am undoubtedly guilty of romanticizing the experience, but I imagined him doing his small part in attempting to somehow unify his passengers, directing them away from their iPods, smart phones, and tablets and toward a shared vision of some kind, even if he didn’t quite know how to articulate it, and even if it was only for the briefest of moments. We have so much stuff to distract us from each other—it was nice to be reminded that we are not meant to be islands, and that we do not need to be enslaved by the technological walls we put up between each other.

Fyodor Dostoevsky’s The Brothers Karamazov was written over a hundred and thirty years ago, but that morning as I thought about the words of our bus driver and the response it garnered from the technorati on board, it seemed to me that one passage from this classic work might as well have been written for that precise moment:

Some claim that the world is gradually becoming united, that it will grow into a brotherly community as distances shrink, and ideas are transmitted through the air. Alas, you must not believe that men can be united in this way. To consider freedom as directly dependent on the number of man’s requirements and the extent of their immediate satisfaction shows a twisted understanding of human nature, for such an interpretation only breeds in men a multitude of senseless, stupid desires and habits and endless preposterous inventions. People are more and more moved by envy now, by the desire to satisfy their material greed, and by vanity… Do you really think that such men are free?