“The distance between self-confidence and arrogance is almost imperceptible. That time arrogance dominated me and taught me a lesson I would never forget.”[1] So concludes a chapter of Jack, the autobiography of the legendary General Electric CEO Jack Welch. In a time when company acquisitions were fashionable, Welch admits buying a company based more on his track record of success than on careful investigation of the transaction. GE’s purchase of Kidder ended as a monumental failure, splashing a train wreck of multimillion dollar losses, corruption scandals and a tainted reputation.

In a study of how do mighty companies fall, business expert Jim Collins notes that “hubris born of success” is the first stage of downfall. Collins notes that in these situations “Success is viewed as ‘deserved,’ rather than fortuitous, fleeting, or even hard earned in the face of daunting odds; people begin to believe that success will continue no matter what the organization decides to do, or not to do.”[2] Past success, in other words, may be the best predictor of future failure, when interpreted incorrectly.

The problem is that the interpretation of success is a tricky thing. For here we are personally involved; we want to attribute our success to our own brilliance. The renown brought by an accomplishment may be the very thing we build our identity on.  We hopelessly desire to be thought of as successful, and may be willing to perform more than one trick of mind to convince ourselves that we deserve success and will stay successful no matter what. 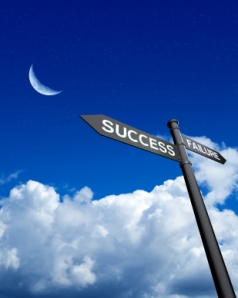 Victories have this blinding quality: they erect a cloud of dust in the very moment when the race is close and won by an inch.  Success can breed denial of reality and of our limitations, and thus be the godfather of our worst failures.

Which is why success is one of the worst categories with which we may want to understand ourselves. Better to aim at being useful, or productive, or constructive. Success generates self-absorption, pride and pettiness; constructiveness dwells on our capacities but for other people’s sake.  Success thinks of our own accomplishments, and the applause we may gain. Usefulness regards our contributions, but the benefit others receive. One looks inward, the other outward. One trips on itself, and falls. The other sprints forward, welcoming triumph and disappointment alike, for neither are that important, nor do they cloud our thinking. We learn from them but are not defined by them, because we do not live for ourselves anyway, nor is being successful a definition of true success.