Some years ago I had the delightful experience of watching The Incredibles. I wasn’t a child anymore (was I maybe 18?) and for some reason (was it a rainy holiday?) we watched it as a family. 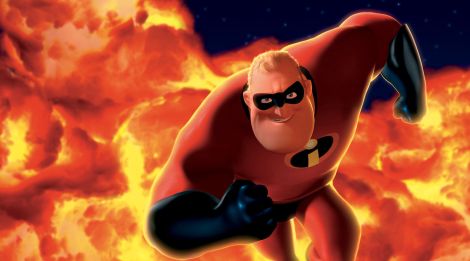 This week I’m reading The Incredibles movie script (I’m studying a bit of screenwriting, though I should actually learn to stop using parentheses), which reminded me why I liked the movie back then. It is well-crafted action story and an engaging cartoon. Mr. Incredible starts the movie bored and unfulfilled as a retired superhero. Actually, his whole family shares in his tension of not being able to use their superpowers anymore: his wife Elastigirl, disappearing teenage daughter Violet, and super-fast son Dash. The plot (as you’re already guessing) is that he does not resist the temptation of helping endangered people and puts himself in trouble.

The movie’s message is similar to other superhero movies: we’re all a superhero deep inside. Or superpowers won’t make you overcome your weaknesses. Or something like that.

But The Incredibles is unique in being a family story. Mr. Incredible is a frustrated dad; Elastigirl is a wife who has to stretch herself to keep everything going; the daughter is a shy teenager who longs to disappear; the boy wants to be faster than everyone. The movie has a clear protagonist, Mr. Incredible, but in movie-talk, it is also a four-quadrant film: you have a character to identify with whether you’re male or female, kid or adult. And it is the whole family, working together, that manages to defeat the evil guy at the end.

It is a good twist on the standard superhero movie: you need more than superpowers to flourish in your family and in life. Actually, the fantasies of power and glory that we satisfy vicariously through superhero movies may be an expression of our weakness. At one point Elastigirl tells him: “… if we’re going to make this work, you’ve gotta be more than Mr. Incredible.”

That is the lure and the caution of superhero movies: be a superhero for a couple of hours, save the world, be respected and admired … only to find that power would not solve your deeper issues. You’ve gotta be more than Mr. Incredible.

I’m glad he found that out too.