This last week has been brutal. Let me explain. I was in Wales on vacation (or holiday as they call it here in the UK) in a beautiful cottage on the stunning Hafod Estate with my wonderful family and some dear friends for a full week. That’s not the bad part. That’s just me bragging. The problem is that I had writer’s block or, as I would say in France, writer’s 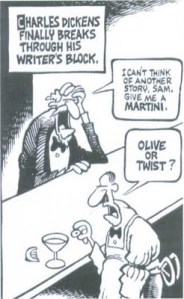 block. (I can’t speak French.) Compounding this relatively common issue is my tendency to fixate on problems. So, as I have been able to think of nothing else for the last week or so, I decided to go with it.

Writer’s block (Latin: block scriptoris). For those fortunate enough to have never experienced it, writer’s block is the bizarre phenomenon when the otherwise abundant well of grammar, syntax and concepts has dried up and a normally expressive person stares with a blank gaze that mirrors the state of their waiting page (or screen). You start a sentence. You erase that sentence. And you repeat this for hours. As I was pondering this authorial irritation, I wondered if anything like this ever happened to the biblical authors or editors. Before you roll your eyes and chalk this post up to too much holiday ‘celebration’, hear me out.

Look at Mark 1:1 for instance: “The beginning of the gospel [or good news] of Jesus Christ.” That’s the whole first sentence. It’s not even a complete one. It’s a phrase. In the tradition of great opening lines, this one falls short of the grand “in the beginning” from Genesis 1:1 (which John thought was so nice he used it again to start his gospel) or even the subtle and brilliant, if less religiously significant, “call me Ishmael” from Melville’s great work. I can just picture Mark sitting at his desk, [1] tapping a freshly cut stylus against his frustrated chin with a fresh, blank roll of papyrus mocking his mental inertia. How should he begin such an important work, the first ever written narrative to try to portray the life of Jesus? Days into the project, Silas walks into his office [2] to see the same blank roll. “Why not just start writing and add the introduction later?” he suggests. Eager to move forward Mark just writes the phrase that now stands at the beginning of the second gospel. Apparently he never got around to revisiting the opening.  Unfortunately for Mark, this was not the last of the writing problems he faced.  Look at the end of his gospel (Mark 16:8). It’s like he forgot to add a conclusion.  It seems so obviously truncated that a later Christian scribe tried to fill out the end. Who knows, maybe the longer version was indeed Mark’s original ending and he just wasn’t much of a closer.

Oddly enough these imaginations are encouraging to me. First, it’s always comforting to project my problems onto other people and then claim that I’m normal…I mean, how else do you think that Freud came up with the so-called “Oedipal complex”? On a slightly more serious note, that a perfect divine being would deign to descend to become one of us and then use other people to transmit his story and truths – other people who were prone to writer’s block and grammar errors like the rest of us – is amazing to me. It is all part of being able to worship a God who knows us both as our creator and as a fellow human, knows us inside and out.

To sum up: I had a nice holiday, writer’s block is a b****, Mark has an odd beginning and ending, Freud was weird.

One response to “On Writer’s Block (sort of)”