There’s a scene in Canadian author David Adams Richards’ latest novel, Principles to Live By where John Delano, a washed up police officer trying to get back in the game, is asked by a colleague why he doesn’t have much use for school. Delano responds thus:

Oh, I don’t know—let’s just say that those who know all the answers are often the ones never able to ask the right questions. 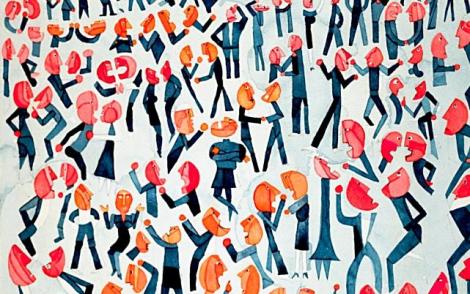 There are many reasons that we often don’t ask the right questions. The echo-chamber of the Internet makes it increasingly easy to simply self-select our sources and turn our social media feeds or daily news browsing into little more than a steady parade of voices that reinforce what we already think or are favourably disposed towards. Living online was supposed to broaden our perspectives with all the easily accessible information out there. But it hasn’t really worked that way. We can’t cope with the sheer volume of content out there, so we just stick to familiar pastures for our online grazing.

We don’t ask the right questions because it’s destabilizing to think that we might not be right about all the things that we think we’re right about. Human psychology actually cannot tolerate all that much ambiguity. We like to have some things settled, particularly things we think are important—things like what life means and how we are supposed to live and what we can hope for. And our identities are inextricably linked with and propped up by our ideas about the world. If you pulled out the “Christian” part of who I understand myself to be, what would be left? What would ground my ethics? What community would I look to in order to explain my history or my imagined future?

We don’t ask the right questions because the right questions are hard to ask. It’s far easier to trade in the binary simplicities of darkness/light, good/evil, black/white than it is to try to actually understand those who don’t share our views and whose views we find repellent. Simple categories provide (mostly imagined) security. They provide ongoing fortification for our own identities and beliefs and they have the happy consequence of consigning our enemies to the outer darkness. They don’t agree with us, after all. They must be stupid, evil, disordered, ____phobic, indoctrinated, radicalized. Or, even worse, intolerant! These epithets give us convenient ways to write people off and to separate ourselves from them.

So, given all of the above, what better questions ought we to be asking, as human beings, as Christians? Well, for starters, we might ask two crucial questions when it comes to any contested issue:

These two questions sound really simple, but they’re actually remarkably difficult. They ask us to simultaneously separate ourselves from our own views a bit and enter into the experience and self-understanding of people we may not like and whose views we don’t admire. But imagine if both sides of any polarizing conflict were to actually do this. American freedom fighter/Islamic jihadi; pro-choice advocate/pro-life defender; Republican/Democrat; Israeli/Palestinian; gay-rights activist/defender of traditional sexuality; Calvinist/Anabaptist; Wall Street banker/ socialist… What possibilities might be opened up if people on either side of these often ferocious debates were to actually seriously ask the two questions above?

There are no shortage of arenas within which to ask the right questions. And these questions wouldn’t in and of themselves magically resolve any of these conflicts. But maybe, at the very least, they could start us on a path toward being more determined to look at and speak to one another not as generic representatives of “the other side” or “wrong thinkers” but as human beings with hopes and fears and anxieties and insecurities and longings that are not so very different from our own. Or, simpler yet, as “neighbours” that we are called by Jesus to love as ourselves.

Asking the right questions will never be easy. But if we stubbornly keep asking them, they will—gradually, fitfully, even painfully, perhaps—come to be something like habitual. Like muscle memory, we will begin to instinctively resist barricading ourselves behind our rightness and open ourselves to the experiences and understandings of the other, even when we are convinced the other is wrong. If we are to live peacefully together in midst of difference—as our twenty-first century globalized world increasingly demands that we must—we have to try.