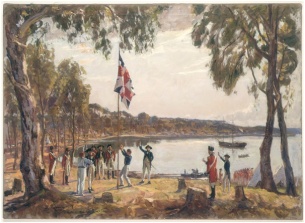 When the first fleet landed in Australia in 1788, chaplain Richard Johnson characteristically turned to his King James Bible for wisdom. At this first Christian Service, drawing on Psalm 116, he asked the nation’s leaders, “What shall I render unto the Lord for all his benefits toward me?” In 2011, as we mark the 400th anniversary of the King James Version of the Bible, the ‘lucky country’ is largely apathetic in reply: ‘lip service, at best.’

Next year I’m heading back to University to research what place, if any, the Bible should hold in Australia’s public education. Few would question the historical influence of Christianity upon our country. Yet with every census proclaiming the decline of the Church, we are certainly not a ‘Christian nation’.  We are a pluralistic and multicultural country, governed by an essentially secular separation of church and state. And like many western nations, the explosion of objective and agreed upon ‘Truth’ is falling out across all social institutions, especially education. What makes the curriculum when truth is up for grabs? What, then, of Biblical literacy?  We need wisdom, but who is game to open the Scriptures? There are no easy answers. But there is a lot of lip-service.

Take the amusing banter between current Australian Prime Minister Julia Gillard, and opposition leader Tony Abbott.[1] As the newly proposed National Curriculum was disseminated to public school educators, one opposition MP asked Ms Gillard why this document made no mention of the Bible. Australia’s first atheistic PM had previously affirmed the King James Version as a key cultural document, even if she was sceptical of its contents. In her view, an appreciation of Western literature required sufficient Biblical literacy. Julia even highlighted her own catechesis as a child, challenging the conservative Catholic Tony Abbot to a Bible memorisation competition. Tony, not to be outdone, also affirmed that “It is important for people to leave school with some understanding of the Bible.” Back in 2010 in a community forum he claimed “It is impossible to imagine our society without the influence of Christendom.”

Such views shouldn’t be controversial. Even prominent atheist Christopher Hitchens recognises that

“You are not educated if you don’t know the Bible.  You can’t read Shakespeare or Milton without it …. And with the schools now, that’s what I hate about secular relativism. They’re afraid of insurance liability. They don’t even teach it as a document. They stay out of the whole thing to avoid controversy.”[2]

Precisely. For all her supportive words, Julia backed the draft curriculum and silenced the Scriptures. Her defense asserted the importance of secular education which promoted free consciences and free thinking, so students can make up their own minds about issues. But as one commentator asked, “How can anyone make a choice without having the necessary food for thought.” Granted, everyone agrees that proselytism in public education should be out of bounds. There is a right ‘bracketing’ of moral and historical judgments, to truly understand another’s story and worldview, before ever considering a critique. But without proper information, students have absolutely nothing to base their ‘mind making up’ on. Beyond bracketing, the national curriculum has quarantined all things Biblical under the rubric of a ‘neutral’ education. Honestly though, how ‘neutral’ is our so called ‘secular’ education? At the same time the Bible is ignored, the national curriculum advocates teaching Aboriginal Dreamtime stories at every grade level.

What we see here is a pedagogical equivalent to the wonder-product Gore-Tex. If you’re into the outdoors, you may know that Gore-Tex garments feature a microscopic mesh that keeps wind and rain out, even as your vaporous sweat can readily diffuse and escape the selectively porous surface. Similarly, the Gore-Tex-like wall separating church and state keeps the Bible out even as the ‘neutral’ core dogmas of Secular Humanism—naturalistic evolution, ethical relativism, legal positivism, and so forth—are allowed to permeate the classroom. Political correctness occasionally allows other ‘religious’ beliefs to suffuse our students, like a school excursion to hear the Dalai Lama, or participation in an Indigenous ritual. But the life-giving dew from Heaven—that once watered our arid land and fostered the flourishing we now take for granted—is confined to a non-compulsory Religious Studies subject. The Bible is effectively barred at the school gates. And all this, precisely at the time we need unbridled access to every historically significant source, especially religious texts like the Scriptures.  We need to form students who, beyond being proficient with technique, are wise: fully ‘educated’ and formed humans able to address massive challenges like climate change, racial division, terrorism, environmental degradation and global financial crisis.

I wonder how Richard Johnson would address Australia at this time. (This time being CE 2011, not AD 2011, since the curriculum cleansed history education of Jesus’ birth, preferring the neutral ‘Common Era’ to ‘the Year of our Lord’.) Were the First Fleet’s chaplain to ask a Biblical question of our present leaders, I suspect he may choose a different Psalm.  Perhaps Psalm 11:3: “If the foundations be destroyed, what can the righteous do?”

[2] Cited by David Hastie, “Why Aussie kids need to learn about the Bible,” VoxPoint, February 2011.