Over the last few years, there has been a rise in popular science stuff in cyberspace. For example, the site “I effing love science” (… er…) has around 2.8 million Facebook likes, while the Youtube program “Scishow” has nearly 500,000 subscribers. And it’s not hard to see why: these sites deal with

“freakin’ awesome” stuff from science. Scishow’s Hank Green will show you stuff like how warp drives could work, and how to turn a lemon into a battery. The memes on “I effing love science” show the big and small of cool science, from galaxies to micro-organisms.

Surprisingly, these sites are used by both those supporting and those attacking Christianity. That science can be used to attack Christianity is hardly surprising – it’s a long-standing modern caricature. But how on earth can Christians use science like this to support their case?

For me, one of the strongest evidences for God is the seahorse. The seahorse truly lives up to its name – it does look like a horse. The chances that such a clear visual correlation would happen coincidentally (as atheists propose) seem more of a logical stretch, to me at least, than that a Designer did it. But this isn’t just more logical. It’s more funny. I think seahorses shows us that, if there is a Designer, He’s got a terrific sense of humour. It’s like the natural equivalent of somebody doing a celebrity impression. If we add the point that male seahorses are the ones that get pregnant and give birth, the humorous side of all this becomes even more pronounced!

Humour is like beauty. It is intrinsically related to design. The difference between a rock and a puppet is that a person designed the puppet for a purpose. An atheistic approach denies a Designer, and thus denies that anything has a purpose placed upon it by that Designer, that Person. Any “purpose” it therefore has is purely projected upon it by us, and thus has an artificiality to it. For the atheist, a seahorse isn’t designed to make us laugh, and thus, it isn’t inherently funny. A nebula isn’t inherently beautiful, either. It just is. Deal with it.

The problem is, that just seems to go against how most of us feel about these things. Galaxies are beautiful. To demote that to being a projection – essentially, a lie we tell ourselves – seems to not quite fit. For most of us, to deny the inherent beauty, intricacy, and yes, humour of much we find in the 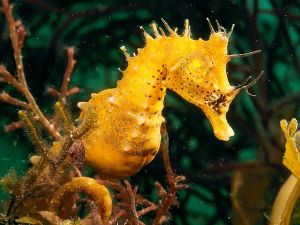 universe, seems to be not only illogical, but kind of a downer. It feels like somebody picking apart a joke, or telling us we only love our spouses because of their genetic code.

This is even more pronounced when we realise that “cool”, and “freakin’ awesome”, and even “I effing love…” are, for the atheist, only subjective projections by us – they’re not actually real. Discovering a new kind of star isn’t “cool”. It just is. These websites rely on a facet of scientific discovery that an atheistic view of science openly dismisses as irrelevant and artificial.

And ironically, two more of these “artificial constructs” are actually the prime motivators behind almost all scientific research: interesting and good. Scientists passionately carry out their research, and defend it, because in their hearts, “interesting” and “good” are not just constructs. They are real. Therefore, it is unsurprising to discover that – contrary to common caricature – many great scientists were actually motivated by Christian convictions when they made great discoveries. Isaac Newton thought gravity was inherently interesting, because it was made by an interesting Designer. The inventor of the bionic ear, Graeme Clarke, did it because he thought God would like more people to hear. Of course, atheist scientists do great stuff too, but they do that in spite of atheism telling them there’s no intrinsic, universal point to what they do.

Now, I’m off to watch Sci-show… ooh, “What is Dark Matter?”… cool! That sounds pretty interesting!

One response to “The Science of Seahorses”