When my kids were younger, I would often take refuge from the delights of dragging unwilling toddlers through a shopping mall by camping out for a few minutes at one of those play structures full of the little balls and slides and assorted other diversions. One day, I decided to strike up a conversation with an older man who was there with his grandchild. He had a thick accent. “Where are you originally from?” I asked him. “Well, it was called ‘Yugoslavia,’” he said. “Now it’s ‘Slovenia.’ It’s a beautiful place, but we had to leave when all of the fighting started.” I paused.  I was curious to hear more of his story, but unsure how deep to probe. Then, out of the blue, the man said, “you know, if you look at pretty much any part of the world where there’s fighting, the main problem is always religion.” 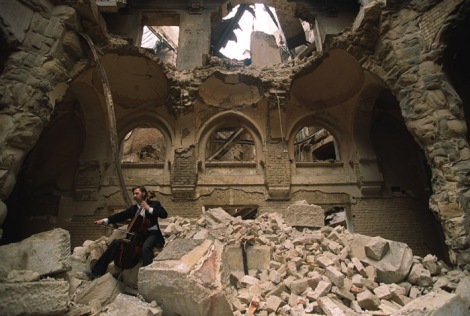 I was a little surprised.  You don’t often hear someone speak in such strong terms about such a potentially loaded topic with complete strangers.  Despite the fact that I was just finishing off a thesis on atheism and religion where the question of religiously fuelled violence loomed very large indeed, I wasn’t quite sure how to respond. After all, for this man, the issue of religion and violence was not a theoretical one. He was tragically familiar with a situation where religion was at least perceived to be a major factor in fomenting hostility, and leading to massive suffering and dislocation. Who was I to presume to contradict him on the topic of religion’s role in violence?

Even though I didn’t initially say anything, my expression must have given me away because he looked at me and said, “You don’t agree?” Well, now there was no hiding from it. No more seeking shelter in words left unsaid, no more possibility of casually steering the discussion in another direction. I had been asked a direct question and a direct response seemed obligatory.  “No,” I said, “I don’t agree.” I told him that I thought that while religion could be a causal agent in some conflict, more often it performed the task of what sociologist David Martin has called “mediation”—it “mediates” or “transcendentalizes” other forms of social differentiation (ethnicity, for example) providing a kind of spiritual veneer to legitimize what is, at root, a complicated combination of social, political, economic, and racial differences.  I talked about how “religion” can, and often does, serve as a shorthand device, a handy tag with which to label and limit the complex set of causal factors that lead to violence, and how despite the fact that many of the loudest voices in our culture point to a strong—even necessary—connection between religion and violence, I simply don’t believe that all of our problems would be solved if we could just find a way to eliminate religion.

I braced myself for the response, but there was none forthcoming. He nodded a bit, but seemed uninterested in talking about the matter further. So we left it at that. The conversation moved to other, less divisive topics.  “What you do for a living?” he asked me.  “I’m finishing off a graduate degree,” I said. “Oh yeah, what are you studying?” my new Slovenian friend asked. “Theology,” I replied. Again, I steeled myself for the inevitable negative response.  Few things shut a conversation down faster, in some circles, than the discovery that I am one of those strange creatures who is (still!) interested in God!  But instead, he said, “ Theology?!  That’s great! You know, I spend a lot of time reading and studying about astronomy.  I find the ‘higher’ questions about life to be just fascinating.”  “The higher questions” and “religion” were, apparently, two very different things in this man’s mind. “Religion” was to be avoided, but the “higher questions” were something to which he attached great value and importance.   And maybe that’s OK. If “religious” equals dogmatic and rigid certainty about the shape our collective life ought to take and a willingness to resort to violence to promote/defend this, then I suppose I’m not very “religious” either.

After the man had talked about his astronomy for a while, he concluded “You know it really is amazing, the world that Almighty God has made. It’s a miracle, really.”  “Yes,” I replied.  “It really is.”