A young man opened the window of his room one autumn evening to wonder about life. After a tumultuous year, he painted his view over Saint-Rémy, depicting a picturesque village lit by a sky ablaze with the moon and stars, flowing with waves of light, a living heaven of movement and color. A bush ascending like flames unites the quiet village with the fecundity of life up above, as a connector between houses, streets and spirals and the vivid surroundings that witness its sleep. “This morning I saw the country from my window a long time before sunrise, with nothing but the morning star, which looked very big,’ he recorded later, almost like a reminder of a memory now superseded by its vivid artistic representation.[1] 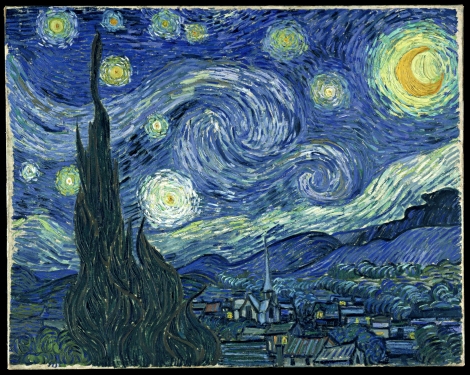 Vincent Van Gogh’s post-impressionist style was experimenting a new perspective on art. Similar to the works of friends like Gauguin and Monet, he set out to portray less the fixed objects of a scene and more of his own inner, subjective experience of the sights before him. “He painted his own artistic, poetic, emotional reactions, his visions,” explains a scholar.[2] Considered by many to be Van Gogh’s magnum opus, The Starry Night convenes thus an impression, an intuition, a reaction. It is a scene from a point of view. It is the amalgam of feeling of an artist inviting us to his own experience of reality.

In other words, The Starry Night is a visual representation of subjectivity. Van Gogh illustrates with canvas and brushstrokes that we do not approach scenes passively, with no interest or perspective, but we invest something of ourselves into everything we experience. We concede meaning and feeling to the situations before our eyes. We join them, so to speak, with our unique state of spirit and personality. We project a piece of our souls into events and people around us, and let them flow within in return. As beings who experience the world, we communicate of ourselves, by the very act of living.

And we long to be communicated back. For as we give of ourselves, as we sprinkle reality with our hearts, as we pour our inner state into nature and flood reality with our spirits, as we boil with being and emotion and overflow ourselves all around, we long to find an Other, we long to encounter and interact, to meet fellow life. We want the starry sky to really be alive, we want its colors and moves, we want to see something of our spirits in it. We want the moon to shine and the breeze to blow, and the morning star to bring forth the dawn behind it. We long for nature to dance and talk with us, because we long for Someone higher still, someone animating the surroundings, someone also pouring His soul into it all, a sign of heavenly life, someone up above witnessing our sleep.

[1] Vincent van Gogh, as quoted by the descriptor of the painting in the Museum of Modern Art, in New York.

2 responses to “View from a Room”