Simeon was born on February 2nd, 2014 and died 40 minutes later. My friends were very excited for his birth—they had both lost a parent earlier in the year and were very much looking forward to something to celebrate. Five days before his birth, they received the news: thanotophoric dysplasia. The husband, a theologian, knows his Greek so, before an explanation was given, he knew that whatever the specifics, it was literally a “death-bearing bad-formation” of the body. They were told they would need to schedule a c-section but, as Simeon’s mother asked, how do you choose the day your child will die? What day can possibly be fitting for that?

She spontaneously went into labor on February 2nd, the Feast of the Presentation, when Christians remember St. Simeon’s famous prayer on being handed the infant Jesus:

Lord, now lettest thou thy servant depart in peace, according to thy word. For mine eyes have seen thy salvation, which thou hast prepared before the face of all people; to be a light to lighten the Gentiles and to be the glory of thy people Israel.

They had not decided on a name but knew, as he was born, that Simeon was the only fitting name for this little baby who would shortly depart in peace. He was quickly baptized and cradled in his parents arms until his death.

Chaos. The chaos of a child’s death we expect to be the most shattering of all experiences. And yet, amid this most terrible manifestation of our world’s brokenness, my friends speak of gifts and grace. They see the day of his birth and death as a great gift. They see the deepened intimacy between them fostered by his life as a great gift. And, above all, they see Jesus’ bodily resurrection as the greatest gift because they know that, just as he was resurrected, so, too, will Simeon be resurrected. These are the gifts of a deep faith formed over time.

And yet, is it simply their “faith” that has transformed tragedy into something luminous? A short-life perfect even in its painful beauty? No. Their faith is important but they know that their power of belief, on its own, is largely irrelevant. 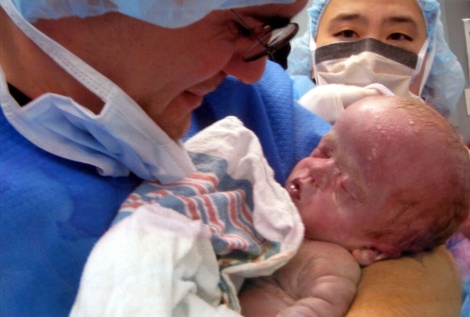 Over drinks, my friend shared the details of waking up at 4 am in labor, knowing with that first body-seizing tension that this was the beginning of her son’s death. Anticipating that moment of labor (or worse, a drive to the hospital on a day selected by the surgeon for that life-beginning and ending c-section), my friend confessed that she did not know how she would ever be able to face the coming doom. But, as the strong, definite contractions of birth began, she told me that she learned then what God’s grace really is. “We think of it,” she said, “as this sort of amorphous thing, this attitude or immaterial substance, whatever that means. That morning, he was my spine.” She then explained how she could physically feel God’s grace holding her up, running along every nerve, empowering her body, mind and heart for the enormous journey ahead: the journey of a mother guiding her child through the transition from life to death.

Instead of simple tragedy, February 2nd and its reverberations continue to be permeated with beauty because God’s grace gives my friends the eyes to see his presence in and through it all. The father says that Simeon is the best thing he’s ever done. The mother says that Simeon’s life continues to give them great gifts.

Simeon’s life should be a lesson in the horrors of a broken world. Instead, Simeon’s life and death are, for me, sacraments of a sort. Signs that God reigns even over the chaos. Simeon and his parents are a testimony that, in our darkest moments, God is, and will be, our spine.