Is it ever right to kill a chicken? Or a dog, or a human being? If not, who says so? God, or our conscience, or plain reason, or utilitarian consequences?

The nature and origin of morality has been one of the most disputed areas in Western philosophy ever since Socrates, and the question is not only philosophical: it addresses us also every day, whenever we encounter actions which repulse our conscience, like abuse or poverty or hypocrisy. Inside or outside academic circles, I fell that this is one of the central questions of life: where do we get our deep sense of right and wrong?

In a surprisingly candid essay recently in The New York Times, called Confessions of an Ex-Moralist, Yale scholar Joel Marks reveals his unexpected and tortuous path across moral philosophy. He professes himself an atheist, who used to believe in right and wrong as independent absolute principles, within a secular framework. But here comes the punch: Marks confesses how, over time, he came to acknowledge that  independent principles can’t be absolute; there can’t be solid right or wrong without a transcendental authority to define them. For the secularist, the only option is to, ironically, make morality absolute and divine. “The day I became an atheist was the day I realized I had been a believer,” as Marks puts it.

I had thought I was a secularist because I conceived of right and wrong as standing on their own two feet, without prop or crutch from God. We should do the right thing because it is the right thing to do, period. But this was a God too. It was the Godless God of secular morality, which commanded without commander – whose ways were thus even more mysterious than the God I did not believe in, who at least had the intelligible motive of rewarding us for doing what He wanted. [1]

How can we resolve this dilemma? Morality is absolute, we all feel anger 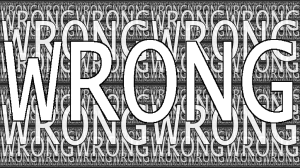 whenever we hear about massacres, for example, even if they are half-way across the globe. Marks himself confesses, “And yet I knew in my soul, with all of my conviction, with a passion, that [things like discrimination of homosexuals and mass murder of chickens for human consumption] were wrong, wrong, wrong. I knew this with more certainty than I knew that the earth is round.” How can a secularist then – who dismisses a transcendental God who defines what right and wrong is, and who imparts this conscience to us – explain the human instinct for morality?

It is here that Marks’ journey is even more telling: despite his deep sense of right and wrong, in order to be consistent to his secular framework, he simply throws morality out of the window. Right and wrong do not exist objectively, as categorically as he knows certain things are wrong, wrong, wrong. He writes, “But suddenly I knew it no more. I was not merely skeptical or agnostic about it; I had come to believe, and do still, that these things are not wrong. But neither are they right; nor are they permissible. The entire set of moral attributions is out the window.”

In the end, for Marks remains just sheer desire: Mother Teresa followed her desire to care for dying people in the same way Marquis de Sade followed his craving to inflict sexual pain; each is just following what their desires command them. Marks is left just with his desires, trying to educate them to be morally commendable desires, but without any framework to define what is moral and

believing everything is amoral. “I now acknowledge that I cannot count on either God or morality to back up my personal preferences or clinch the case in any argument.”

I really appreciate Marks’ honesty. His journey illustrates the contortions and intellectual acrobatics humans perform when they deny the basic fact that defines what does it mean to be human: we are good creations of a good God. We fall into secularism or relativism, into inconsistency or contradiction, trying to fend off a divine basis for our morality. But hey, we ate from the tree of the knowledge of good and evil, and there is no escaping it. I’d rather acknowledge our knowledge of what good and wrong is, and our need for God, and try to live according to his blazing goodness, than deny the conscience that makes us human, and see myself grow a bit closer to Marquis de Sade than to Mother Teresa.

4 responses to “Why it is not wrong to kill chickens”