Black Friday—the traditional American shopping day that occurs the day after American Thanksgiving or the final Friday in November—has long been a tradition in the United States. For those who don’t know about it, it is the day that many retailers “go into the black” for the year, finally making a profit. Of 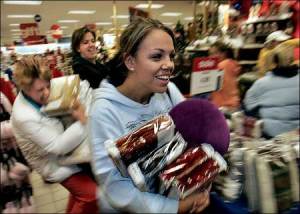 course, because of the extensive sales (often beginning at 4am), many people have traditionally used this shopping day to begin purchasing gifts for Christmas. The final Friday in November has also, traditionally, marked the beginning of the Christmas season in North America. With the thanksgiving turkey eaten and all hints of Pilgrims, Native Americans, and other potentially disturbing history lessons happily buried beneath an evening of American football and a stomach ache from over-eating, the day-after-Thanksgiving used to greet those venturing into public with garlands, wreaths, bows, lights and Christmas carols buzzing in the air.

This year, the aforementioned Christmas accouterments began appearing sometime closer to November 15th or even November 1st. No one really seemed bothered by this remarkably early appearance of Christmas. However, some people were outraged when stores in America decided to start “Black Friday” sales on Thursday, adulterating a traditional public holiday both by making people work and by tainting the holiday with consumer practices (not that Thanksgiving wasn’t already well-consumerized, but the opening of retail stores on the holiday meant that the marketplace was more obviously and unavoidably infiltrating the day).

I, on the other hand, am deeply bothered by the early appearance of Christmas, not just this year but every year. Historically—as in before the Victorian invention of the modern celebration of Christmas—Christmas didn’t

begin until the night of December 24th. At that time, the faithful marked the birth of Jesus and continued celebrating for 12 days. The celebration was, from what historians tell us, frequently marked by gift giving, lots and lots of drinking, eating, and general merry making. But I’m getting ahead of myself…

The period before Christmas is Advent, a much ignored season of the year in modern culture. Sure we have advent wreaths but there is no real sense of “advent,” from the Latin “adventus” or coming. Coming: as in not here yet…not arrived…expected…hoped for…looked for….

Some Christians—who initiated the celebration of Christmas in the first place—do try to keep the celebration of Advent alive. In Christian practice, Advent is kept alive through fasting, prayer, and a focus on the future, on things yet to come (not Christmas carols, lights, bows, wreaths, or garlands: these are the signs and symbols of celebration not expectation). What is it that Christians look for, long for, pray for, hope for during advent? Christians look for, hope for, expect the coming of Jesus. Advent is a time of remembering God’s promise to restore the world he created and of looking for the fulfillment of that promise. Christians believe that Jesus is that very creator-God come to dwell among humanity for a time, beginning that work of restoration and renewal. Yet that work isn’t finished yet. During Advent, as Christians re-live the historical hope for renewal, they also continue to hope for the completion of God’s work of restoration in a world still broken and still in need of healing.

So, what’s wrong with decking the halls early? Why is it worse than shopping on Thanksgiving? For the simple reason that in celebrating Christmas before the holiday comes, Christmas day and the celebration of Jesus’ birth becomes the end of the story, the main event that we then pack-up. By celebrating in advance, we lose the practice of hoping and of praying, we lose the holy expectation that sees our broken world and longs for it to be made whole.  In celebrating Christmas as the beginning of a new season—the Christmas season—Christians acknowledge that the process of God’s restoration begins with the coming of God in the person of Jesus but that restoration is not completed in a day. It is ongoing, continuing, even in this Advent season. So, I say, let’s not deck the halls with boughs of holy because it is not the season to be jolly… not yet. Right now, it is the season to be subdued by the darkness that engulfs our world and to long for God to come dwell among his people once again.