Some days ago my wife and I introduced our 3-months-old son to one of our favourite sports: people watching. We crossed a street filled with trattorias with live music, and walking toward the sunset, emerged at the top of Piazza di Spagna, a 138 steps stairway always crowded with people ready to see and be seen. We could view almost all of Rome from the top – the tall, picturesque trees, a few candlelight restaurants, a convent by the hill, upscale, perfumed shops, 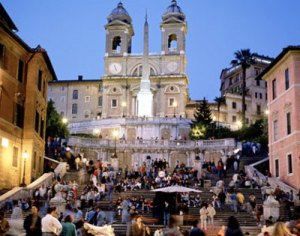 church domes all the way to St. Peter’s across the river. But nothing was as amusing as watching people march up and down the stairways as their own world-stage runway.

We sat down, crowned ourselves as jurors and started giving out prizes to people. The prize of the most elegant person went to a lady in her sixties, flowing down the stairs holding hands with a couple of grandchildren, wearing a brown skirt and high heels, beige blouse and a collar of pearls. The most entertaining scene came from Bengalese salesmen offering fake Gucci and Louis Vuitton purses, who ran away when the police arrived, hid behind a wall, then came back the next minute, then ran away again, then came back… Meanwhile, a couple was exchanging innocent looks and brushing one another’s hair, and a bride-to-be rang a bell and walked among the crowd sheepishly, while her friends laughed and took pictures.

Then we started picking up winners according to their nations. The most Japanese group had last-model cameras hanging from each of their necks, and the most Brazilian couple was wearing… uhm, Brazilian soccer jerseys. The most American person, though not easy to spot at first, was unmistakable when found: moustache, tight jeans, and cowboy hat (don’t we all love Texas?). Not that Sarah and I were any more fashionable; she had borrowed one of my pullovers, which is just to be downgraded to the pyjama category, and my t-shirt was filled with the vomit Pietro had poured over me an hour before.

It was then that someone emerged from the crowd. It was a girl in her twenties, from Eastern Europe or maybe Russia, dressed as for an evening cocktail, with elaborate make-up and hair spotless as in a shampoo commercial. She was taking pictures with several poses and looks, so we figured she was a model. But as we observed better, we noticed that the photographer was not of the usual kind: it was her mom and her little sister. They were following the model-to-be and taking pictures maybe for her first portfolio, which would appear on the desk of some agency among several thousand other young ladies’ pictures, trying to get a dim light of attention.

That girl stood out for her poses and looks, yet she was striving hard for something everybody else in those stairways also secretly wanted: to be noticed, to be valued, to be appreciated. People were there to hang out and enjoy a strawberry and lemon gelato, for sure, but also sitting and waiting with the hope that somehow they would be noticed and stand out from the crowd. They wanted glamour, wanted to be part of a colourful postcard, and feel special and

cultured and desirable. We all joined the crowd but we wanted pictures to be taken of us too, and feel that somehow we transcended the multitude. Tourists or locals, fashionable or not, we were all looking at the human spectacle, revelling in it and yet yearning for something more, yearning for someone special to stop by and look us in the eye. We all craved for a more splendorous presence, Someone distinguished that would come, woo everybody in the crowd, and yet select us for his company.

I looked down to Pietro. He was drinking his baby milk with closed eyes, happy in his own world. But I felt like saying, “When your heart becomes restless, when you come to seek something higher, and yearn to be bathed and included in glory, and long for a bliss of transcendence, Piazza di Spagna is not the place to come. Nor any other piazza, runway, stadium or shopping mall. Look for God, son. Look for God.”