A few years ago, though, a significant major Pew Study revealed that most American scientists

(51%) believe in some form of higher power deity. While this percentage is far lower than most average Americans, the study does note some very interesting data points. For instance, this exact study was done with the same questions back in a 1914 survey as well as in 1996. While American culture has become less influenced by Judeo-Christian values, surprisingly American scientists answered almost the same way as their 1914 counterparts. In other words, in the academic scientific world, there has not been an increasing secular drive among America’s scientific community. This is important to highlight because all that has increased in recent years then is the rhetoric of those who would like to create a wedge among the scientific and theistic communities.

However, the Pew Research Poll shows a trend that younger scientists are actually more likely to believe in God than their older brethren. This shows that increasingly the younger generation is able to fuse a belief in the scientific physical world with a transcendent metaphysical worldview. In general, we are watching this movement worldwide where a new emphasis on the “spiritual” is not necessarily at odds with “physical” world.

So instead of increasing secularization within the American scientific community, we are seeing, at the very least a remarkable stabilization of opinion towards God, and perhaps even an increase in compatibility between theistic and scientific communities.

How can this be? Simply put, the scientific world studies and tests the physical world and therefore does a great job of telling us “what is.” What science cannot do is tell us “what ought to be.” The reason for this is that the moment you move from “what is” to “what ought to be” you have moved from “fact” to “value.” This is not a slight on science, just the limitation of observation. The famous 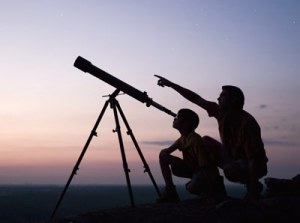 philosopher legal scholar Stanley Fish has a great article about this. He says, “While secular discourse, in the form of statistical analyses, controlled experiments and rational decision-trees, can yield banks of data that can then be subdivided and refined in more ways than we can count, it cannot tell us what that data means or what to do with it.” The reason for this is that the world of “ought” is filled with values, assumptions, presuppositions, and, frankly, opinion.

The spiritual world can be defined a lot of different ways, but at the very least it is the realm where we find values and the reasons for what ought things to look like. It strives to give meaning and purpose, all out of assumptions and presuppositions. It is because of this divide that perhaps we are seeing a new coexisting synergy between science and faith that will likely increase in the coming years

7 responses to “Do scientists believe in God?”