I come from a musical family. My grandmother was a concert pianist, my mother plays piano by ear, my sisters are professional standard musicians. One of my brothers plays guitar, the other plays drums, and I, meanwhile, play… nothing. At least, I don’t any more. There was a time when I played classical guitar, clarinet, and sang like a wishful angel, but those days are pretty long gone. I wasn’t all that bad, but lacked the inspiration. 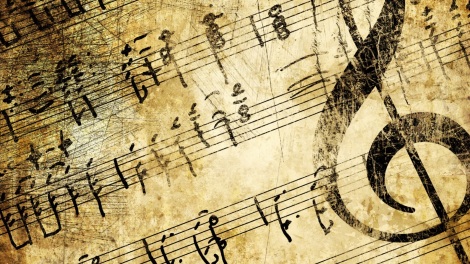 Music at school was about practice and performance. It was about passing exams and playing in public. Learn this, learn that, work harder on that other thing. In seven years of clarinet, guitar and voice lessons, I don’t recall once being asked if I enjoyed what I played, or what sort of music I might like to make. I enjoyed choral singing (safety in numbers) but playing and performing became fearful to me. I simply didn’t enjoy it, hated the limelight, and had no idea what I was missing: a muse.

I’m pleased to say things have changed since then. Music is essential to me now. Not the endless shuffling of tracks to fill an empty moment, but the stuff of my life and faith. I’ve found my muse. I know why the slave sings. I know why Handel wrote the Messiah and Bach wrote the B Minor Mass: they all had the same muse, and that muse was the Christian gospel. I have read Richard Dawkins but would respect him so much more if he could give me a reason to sing. Not just something to propagate the species, but something that touches the soul.

One could argue, easily in my view, that Christianity has been the inspiration for the finest art and music of the last two thousand years. Take Christianity away, and what do we have to sing about? Where do we find hope in times of trouble? And will that song be heard next century and beyond? Fairy tales simply will not cut it. I have written lullabies for my children and if push came to shove could sing a Michael Bublé mash up for my husband, but these are a far cry from Handel’s Messiah and they will not last. There is a reason the slave sings spirituals, and there’s a reason these songs endure. They capture what C. S. Lewis describes as ‘deep magic’. It’s where the soul goes. No soul, no song. No muse, no music.

Great art and music are inspired. In order to capture the world’s attention, they must have a muse, a muse that touches the soul. Many find it in the Christian gospel, where we discover that God loves the world and everyone in it, forgives our gravest errors, heals and redeems, comforts, challenges, and hears our prayers. Is there anything that can match it, indeed anything that comes close? It’s the reason for the Sistine Chapel, the B Minor Mass, the slave’s song and my deepest, profoundest joy.

One response to “No Muse, No Music”